WHAT EVER HAPPENED TO VINYL?

If you ever owned or still own a record collection, you may have wondered why they don’t make vinyl records anymore. Actually, a few small independents still make records for diehards, but it’s a tiny percentage of recorded music now that CDs and DVDs have taken over.

The earliest records were made of paper, then tinfoil, wax, hard rubber, shellac and finally Polyvinyl Chloride (usually called “PVC”, but record collectors prefer “vinyl”). Dr. Waldo Semon, a researcher at The B.F. Goodrich Company in Akron, Ohio, first discovered PVC in 1926. He was attempting to find an adhesive that would bond rubber to metal and by combining the gas vinyl chloride with salt and petroleum and exposing it to heat, he came up with a flexible gel that had similarities to natural rubber.

It was a few years before they found a use for the stuff but eventually the auto industry discovered that it made excellent shock absorber seals and then found many other applications. RCA Victor research showed that records coated with vinyl had much less surface noise than shellac and the company started pressing transcriptions coated with vinyl for radio stations in 1929. Two years later they made the first 33 1/3 rpm vinyl discs for consumers. The slow-speed discs didn’t catch on with the public then, as most of the record players in homes spun at one speed only--78 rpm.

It took World War II to put vinyl in the spotlight. The smooth plastic played a significant role for the armed forces, becoming a replacement for natural rubber, which was in short supply. After the war in 1948, Columbia Records introduced the first 12-inch, 33-1/3 rpm micro-groove LP. A year later, RCA Victor brought out the 7-inch 45 rpm single. It was the beginning of “the golden age” of vinyl records. 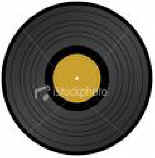 Vinyl ruled the roost until the eighties, when sales of records and tapes went “flat”, neither rising nor falling. This wasn’t good enough for the record companies. They needed a new way to sell music and the stuff you play it on to keep those profits rising. Luckily, someone at the Phillips Corporation (owner of Polygram Music and Island Records) had the bright idea that it would be good for their stockholders and investors if they could get record buyers excited about buying music again by creating a new format and a new machine to play it on.

And so was born in 1982 the Compact Disc, in all it’s shiny, aluminum and plastic glory. At first. CDs weren’t as successful as hoped. One reason was their higher price. While vinyl records topped out at around $9.98, CDs were a third or more pricier despite the lower cost of manufacturing. The new CD players also sold slowly because of their high price.

Then in 1988, almost overnight, CD’s were everywhere. Suddenly they were a huge success and it became almost impossible to get anything new on vinyl at all. If you assumed that this change took place because it was what the consumers wanted, you’d be dead wrong.

What happened was that the flexible return policy that had always existed between retail record stores and distributors (i.e. stores could buy a record and if it didn’t sell, they could return it.) was abolished by all seven major distributors at the same time. (Collusion?)  They announced that they would no longer accept returns of vinyl and began deleting most of their vinyl catalogs. This literally forced record stores to stop carrying vinyl records because if they didn’t sell, they were stuck with them. So compact discs replaced vinyl not because of their technical superiority, but because the big record companies wanted more profits.

The seven major recording companies of the eighties are now down to three, which control 95% of the $30 billion a year recording industry. They have announced plans to raise the retail list price of CD releases to $17.98 soon. The cost to produce a CD by these companies averages less than a dollar.