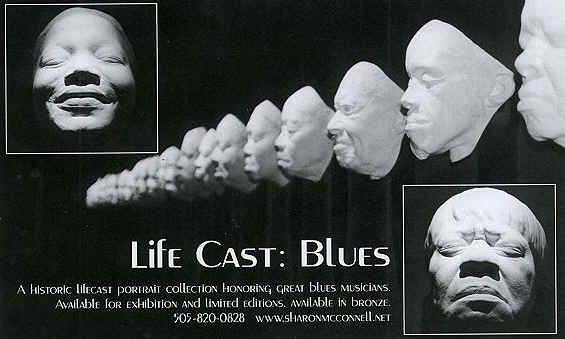 Northern New Mexico is home to hundreds if not thousands of artists. Creative types like the Desert Mountains of the Southwest for its quiet, unhurried lifestyle and majestic scenery. Santa Fe, the state capitol, is famous for the high quality of its local art and recently I learned about a sculptor who is creating some fascinating blues monuments there.

Sharon McConnell became an aficionado of blues a few years ago and began a project with historic implications that has taken her to the heartland of the blues. McConnell was 27 when she was diagnosed with a degenerative eye disease that has left her blind. The disability has not stopped her from continuing her career in sculpture.

McConnell's blues project is to make as many face casts of blues greats as possible while they are still alive. She began in 2002 with John Hammond Jr. The next month she journeyed to Mississippi to create casts of Gatemouth Moore, T-Model Ford and several others. For a time, she was an artist-in-residence at the Delta Blues Museum in Clarksdale, where she cast Blind Mississippi Morris, Little Milton and others.

In January 2003, she visited Othar Turner and preserved his face just five weeks before he died. His cast was made into a bronze, which she presented to his family at the Sunflower River Blues & Gospel Festival. Back home in Santa Fe, she made casts of Odetta and Alvin Youngblood Hart in her kitchen. While in Chicago for the blues festival, she created more casts of Koko Taylor, Bo Diddley and Eddie Clearwater.

In 2004, she continued her quest to immortalize the living blues greats, with casts of Robert Lockwood Jr., Pinetop Perkins and Honeyboy Edwards--now all in their nineties. She also captured plaster likenesses of Chris Thomas King, Eddie Campbell and Fruteland Jackson. Although you might think it would be uncomfortable to have your face completely covered with plaster except for your nostrils, McConnell says the experience is quite calming. More than one subject has fallen asleep during the procedure.

McConnell's work with the faces of blues greats has given her a visual idea of how they look. Her love for the blues has grown with this project, as she meets the people who make the music. She plans to eventually cast all her faces in bronze for display at blues museums and clubs. A less expensive plaster set may be offered to schools as a touring music history display.

Between casts, McConnell spends time writing grants and researching other blues artists. She likes to play her 1928 dobro when she's not working. Her plans this year include casting Chuck Berry and Ike Turner. "They said yes," she declares happily, "and there are more to do."

You can see photos of Sharon McConnell's sculptures and read more about this unusual artist at her website: http://www.sharonmcconnell.net/