Writing a column gives one the opportunity to be a name-dropper. I must confess I enjoy it as I get a chance to share some of my “celebrity moments.” I had quite a few of them during my years playing DJ on big-city radio. Most of the encounters were inconsequential. An introduction, a few moments of banter, and exit stage left. 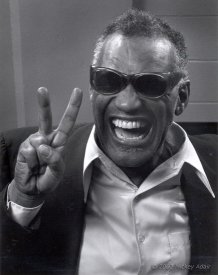 Ray Charles was my briefest “celebrity moment.” I was asked to introduce his show at a winery a few miles  from San Francisco. I usually accept offers to introduce artists I like because it gives me a chance to meet them, schmooze backstage sometimes and get real good seats for the show.

I hung out backstage before the Ray Charles show, but Ray wasn’t around. I did get to chat with his band-leader for a while. He let me know that working with Ray was not always an easy matter. For one thing, Ray kept disappearing. “He’ll take off and not tell anybody where he’s going,” he lamented. “He likes all different kinds of music and I wouldn’t be surprised if he disappeared and then showed up one day doing an album with Don Ho.”

Just before the show, Ray Charles came by. His hand was on his guide’s shoulder and they were truckin’ along. As they came closer, the bandleader introduced me to Ray. I mumbled something about having been a big fan for more than thirty years. Without even slowing down, Ray flashed me a big smile and said, “Well don’t stop now!” and marched away.

The concert started. I was thrilled to introduce the show. To be even a tiny part of a Ray Charles performance was a great honor. I made my introduction without messing up too bad. Then I took my seat  on the front row about three feet from Ray’s grand piano. I could have leaned over and touched his pant leg.

It was a great show--as most Ray Charles performances are. I drove home in a golden glow. Ray is large in my hall of heroes and it’s always exciting to meet one of your heroes.

Another Ray who comes to mind is Ray Bryant. Not everybody knows about Ray although he had several hits back in the ‘60s with “Little Susie,” “Slow Freight,” and “Madison Time.” Ray is a really fine piano player who is considered more a jazz guy than a blues guy, but he is obviously deep into the blues and most of his albums include some.

Growing up in Philadelphia, Ray’s jazz and blues piano with gospel and latin influences tossed in, made him popular in the late ‘40s. He was the house pianist at the Blue Note for years, backing up jazz greats like Charlie Parker, Miles Davis and Lester Young. Although he plays jazz with the legends, Ray is at his best playing solo acoustic piano blues. His left hand can stride and stroll with the best. His solo and trio blues piano recordings are some of the finest examples of blues piano around. Recommended are the 1959 release, “Alone With The Blues,” the Pablo CDs, “All Blues,” (trio) “Solo Flight,” (solo) and “Potpourri” (trio). Also enjoyable are Ray’s solo performances at Montreaux in 1977 and 1999. Now 70, Ray Bryant is still a vibrant member of the American music community. His latest album, “North of the Border,” was released just weeks ago.