Radio has been with us a long time. Since the ‘20s, when eager listeners huddled around early models to hear a panorama of news, music, drama, comedy and sports, radio has brought us entertainment and information in peerless fashion. Of course the glory days, when radio had little competition, are long gone. Now a wide variety of media thrills await the seeker, and radio has degenerated, for the most part, into an audio billboard from which  corporations hawk their products. It has become for many listeners, nothing more than background sound.

But we should never forget the historic role radio played in spreading the Blues back in the early years. It was radio stations in Memphis and Clarksdale and Helena that gave black farm workers on the Delta and on the Mississippi River, their first taste of the Blues. 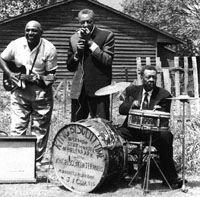 Programs like the King Biscuit Hour, hosted for many years by Sonny Boy Williamson and broadcast every day during the noon hour, inspired many Delta youngsters to unwind the wire holding their mama’s broom together and nail it up to the barn wall to make some music. Other kids made guitars out of cigar boxes. Jimmy Reed said that when he was a boy picking cotton, he would always try to go up to the cookhouse to get a drink of water when Sonny Boy was on the air so he could listen for a few minutes.

Most of Blues biggest names grew up listening to the radio. Receivers were cheap enough that poor folks could afford one so even in the scantiest shacks, you’d hear music. Radio was a lifeline to southern blacks and inspired many of them to take Highway 61 to Chicago.

Radio lost a lot of its power and glamour after World War II. Television was the new kid in town and most of the variety programs that had been standard fare on the radio networks moved over to the new medium. Radio continued to be successful by devising various formats of recorded music and talk shows, but it never came close to achieving the artistic successes of its past.

Nowadays it’s money and numbers that drives radio. A small group of corporations control nearly all commercial US stations. They don’t really care if you like what’s on. They program specifically to get certain numbers in the ratings, which translate into advertising dollars. Audio art on commercial radio is only heard now and then--mostly in the commercials. Non-commercial radio has helped to fill the gap and most of the blues being played on radio today is down at the bottom end of the dial. In the Bay Area, we are lucky to have WMNF, a station that loves the Blues, but nowhere else on the local dial will Blues lovers find much to listen to.

But there’s light at the end of the tunnel. New methods of audio transmission; internet, satellite, fiber optics, etc., have created a new breed of “broadcasters” who are making it possible to listen to programs of your choice anytime, anywhere. The internet is a vast ocean of eclectic audio. Blues are springing up all over the place. If you don’t believe me, put <blues> in your search engine and watch what comes up.

And on the horizon is pay radio. The concept infuriated me once, but now I welcome it with open arms. At least two companies with major corporation financing are putting up their own satellites. With the purchase of  a receiver unit, and a small monthly fee, you will soon be able to listen to 100 channels or more of eclectic audio at home or in your car, most of it commercial free. Yes, there will be Blues channels.

It really ticks me off that the only nationally syndicated Blues radio show with much success is a show hosted by an actor, playing a character created for a television show and movie, who talks in dialect when he hosts the show.

I’ve got nothing personal against Dan Akroyd. I’ve been enjoying him on television and in films for many years and his blues credentials are top flight. But to host a Blues show as a fictional character, in dialect, doesn’t make it with me. Blues is the real deal, not an imitation. It deserves a real host, not a parody. How about just hosting the show as yourself, Dan?