I was in the production room at KSAN one evening, putting together a spot for a record store, when I got a phone call from Wild Bill, a crazy DJ and good friend who worked at KTIM. "Hey, you’ll never guess who’s in town!" He yelled. As we were in San Francisco, the international crossroads for music and entertainment, my chances of guessing right were about as good as my chances of getting on Deal Or No Deal. "Who could it be?" I wondered. "Jimmy Reed!" Bill screamed delightedly. 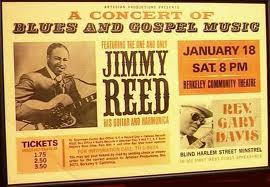 There was a short pause while my brain digested the information. "Jimmy Reed’s alive?" I finally asked incredulously. "Yeah, he’s in town to play at the Savoy-Tivoli and I’ve set it up for you to do an interview," Bill bragged.

I was blown away. For years I and quite a few others had assumed that Jimmy Reed was dead. It was 1976 and nobody had heard much about Jimmy for a decade or so. A couple of mediocre albums had come out in the early ‘70s, but Jimmy had been out of the news for quite a while. I thanked Bill profusely for the opportunity to meet one of my musical heroes and arranged for the interview.

The production room was already booked when Jimmy showed up at the station, so I took him down to the basement where we talked for about an hour, surrounded by racks of old records and radio equipment. Jimmy’s deep Delta dialect had me leaning forward in my chair most of the time to hear every word. Jimmy talked about growing up in Mississippi; how he went to work in the cotton fields as soon as he was big enough to handle a hoe; how he snuck up to the house at lunch time to hear the King Biscuit Show with Sonny Boy Williamson on the radio and how he built his first guitar out of a cigar box.

He recalled hopping a freight and riding the rails to Chicago, and he explained how he was inspired to write such songs as "Big Boss Man" and "Bright Lights, Big City." He discussed his problems with alcohol and the several years when he was unable to perform because of illness. He was proud of his success in quitting drinking and was happy that he could get back to his music again. This honest accounting of Jimmy's life was compelling. I was thrilled to be hearing it in person.

That night I went to see Jimmy play. I stayed through both sets and Jimmy sounded great. When he came back to the Savoy-Tivoli a couple of months later, I went to see him again. He remembered me and greeted me warmly.

Jimmy played that night and the following night. After the show, he was driven across the bridge to Oakland, where he was staying with a friend. Sometime that night, he died in his sleep.

I will always treasure my time with Jimmy Reed. He was the genuine article. "What you sees, is what you gets," he said. It was an experience I will never forget. I still enjoy listening to the tape of that conversation as Jimmy talks about his life and his music. And I remember the lyrics of a song he recorded in 1968 called "Life Is Funny."

"If you just stop and think, Baby,

Honey, love is a funny thing.

Whatever you put in,

That’s what you expect to gain."