There was a time in America when the term “bootlegger” was very common. It was back in the 20’s and early 30’s when prohibition was the law of the land and the only booze you could get was either legal by prescription, or illegal, made by bootleggers. Many a man built a still and produced corn squeezin’s or some other rotgut that found a ready market in juke joints and nightclubs around the country. The only real difference, other than quality, was that legal booze had a federal liquor license and bootleg hootch did not.

It’s interesting to note that the term “bootlegger,” came originally from the unethical pioneers who concealed liquor in their boots when they traded with the Indians, a practice fairly common in the Midwest in the 1880’s. Later the word became synonymous with illegal booze manufacture and distribution.

When prohibition made it hard to get legal spirits, it fell to the bootleggers to supply the goods. So there were hundreds of thousands of homemade stills, distilling God only knows what into some kind of potable liquid. The bad stuff was real bad and a lot of folks died from drinking it. The good stuff is what kept Chicago and other cities going for a few years. It also financed the rise of the gangs who got rich and powerful supplying the market with badly wanted goods. 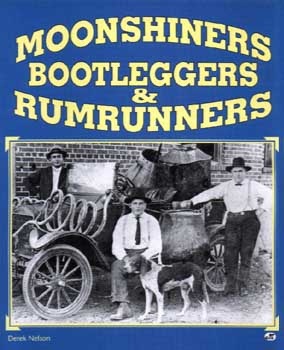 The Feds had a team of booze cops, who went around fighting gangs and busting up stills. When prohibition was finally recognized as a bad mistake and repealed in 1933, their head guy, Harry Anslinger, (a nephew of Herbert Hoover) who was about to be out of a job, went up on Capitol Hill and with an impassioned rant convinced congress that his team of still-busters should not be fired, but be kept on duty to fight a new menace to America’s youth---marijuana. That’s where all that started.

Even after prohibition was repealed, bootleggers continued in business for many years. There was still a market for the illegal stuff, especially in the eight states that retained prohibition for a time. But eventually, legal distilleries filled the demand, except in a few backwoods places where bootleggers still ply their trade.

There were numerous blues songs inspired by bootleg booze. The Mississippi Sheiks recorded “Bootleggers Blues” in 1930, detailing the trials and tribulations of the whiskey-makers. The Memphis Jug Band recorded “Rukus Juice And Chittlin’” in 1934. I don’t think ‘Rukus Juice’ had a tax stamp on it. A 1941 recording by Little Bill Gaither reveals his desire to make a killing selling “Moonshine By The Keg.” Of course we should keep in mind that almost all of the beer, wine and hard liquor mentioned in thousands of early blues and country songs, was of the illegal variety.