BLUES MYSTERY
THE CASE OF THE VANISHING BLONDE 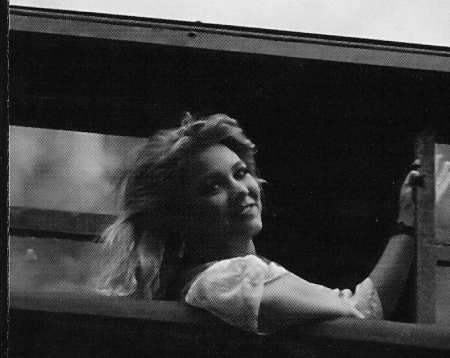 It has been about 15 years since I was introduced to Keri Leigh. I’ve never met the lady myself, but I was blown away when I listened to her first albums. Keri has a four-octave voice and knows how to use it. She is also a diehard blues fan.later moved to Oklahoma where she began sneaking into clubs to hear the blues and even singing along sometimes at the age of 13. Her chosen singing career hadn’t even begun when, at the age of 16, doctors found nodes on her vocal chords and removed them. They advised her never to sing again and so for several years, Keri pursued other childhood dreams of writing and being a DJ.

She was successful at both and for several years, balanced jobs as a newspaper writer by day and a DJ by night, spinning records at a local station. Keri’s love for the blues inspired her to found the Oklahoma Blues Society, which hosted many jams with local artists. During one of these jams, Keri was coaxed back on stage to sing a song. She started singing regularly at the jams and at one of them, she met guitarist Mark Lyon.

Leigh and Lyon hit it off right away and eventually were married. They moved to Austin, Texas and formed the band, Keri Leigh and The Blue Devils. Clifford Antone loved the group and booked them at Antone’s every week for more than a year. They released two albums in 1991 and 1992 on the Amazing Records label. In 1993, Keri received international attention for Soul To Soul, the book she wrote about her friend, Stevie Ray Vaughan. In 1994, Keri and Mark traveled to Muscle Shoals Sound Studio in Alabama to record her third album, “Arrival.”

All three albums received critical raves. The Denver Post said, “Leigh is a singer with a four-octave range and perfect pitch. She sings with great force yet remains perfectly clear and in control. She's a find!" Some reviewers called her the greatest voice to come out of Texas since Janis Joplin. Her first three albums netted four Handy Award nominations.

No new albums have been released since 1994. A new album, titled “To Hell And Back,” was planned for a 2002 release, but it has never appeared. I found a fan club “Best Of” CD on eBay that included four previously unreleased tracks, recorded in 2001, but it was issued in very limited quantities. Aside from a few marvelous columns about the Mississippi Delta written for a blues magazine several years ago, the current news file is empty when it comes to Keri Leigh.

I really admire this singer and I got more and more curious when I could find nothing on the web to indicate she was still performing or, in fact, even on the planet. No gigs, no festivals, no fan clubs, I wondered what she could be doing. Writing a book? Doing radio again? Decomposing? I spent hours researching the internet, but could find nothing.

Not one to give up easily, I kept trying. I contacted booking agencies, record companies, radio stations, magazines she had written for. I contacted Texas government agencies that promote performing artists. I wrote to other DJs, Austin newspapers. Results post-2002, zero.

Well, one, really--one tiny mention of her name with a lot of other performers at an Austin benefit concert that was scheduled in October 2006. But I found no news of the benefit. Did it ensue? Did anybody actually see Keri Leigh?

The questions remain unanswered as my deadline approaches. Where is this exceptional singer hiding? And why? I’m sure if she had checked out, it would have been news. I mull over the possibilities. Did she have a kid? Did she break up with her old man? Did she have more problems with her vocal chords? God, I hope not. Maybe she just decided to chill for a while.

I do hope someone who reads this will have some answers for me. I’m beginning to lose sleep. Help!